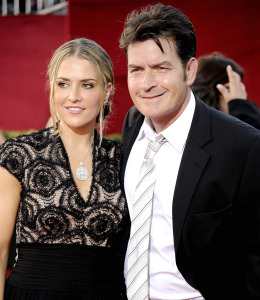 "Charlie has been great, very attentive and nice to Brooke," Moira Fiore, Brooke's mother, told People magazine. "He is not even going to the SAG Awards tonight. He wants to be with her."

The "Two and a Half Men" star has been visiting his wife in ICU daily for the past week, despite a court-ordered protective order requiring Charlie Sheen to stay away from his wife after the couple got in a violent argument on Christmas Day. Charlie was arrested and booked after Brooke called the police and said her husband threatened her with "a knife."

Mueller was admitted last Tuesday for an infection that entered her bloodstream after surgery for an impacted wisdom tooth.

Fiore tells the magazine that her daughter's liver and kidneys are doing better, but that they are still concerned she has pneumonia.

The couple were supposed to face a judge last week stemming from Charlie's December 25 arrest, but the hearing has been postponed due to Brooke's health problems.