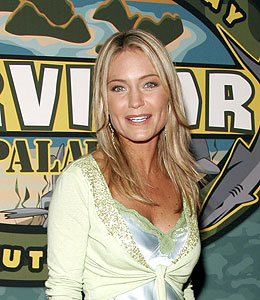 Former "Survivor" contestant Jennifer Lyon has lost her battle with breast cancer. She was 37.

Lyon, who finished fourth on "Survivor: Palau" in 2005, was diagnosed with the disease in 2005, and underwent a double mastectomy and chemotherapy.

"I was completely shocked and overwhelmed," Lyon told Us Weekly at the time. "I felt fine that day; in fact, I've been healthy my entire life."

Austin Carty, a former "Survivor" star who dated Lyon, tells the magazine, "Jen was a genuinely selfless, sweet-natured person. She always had a smile. She cared about every person."

Carty says he last saw Jen during the summer of 2009, at a breast cancer charity event. "She was engaged in the greatest fight of her life, but she had every intention to fight and spread her positive messages."

He adds, "This has really rocked the Survivor community. It's just so sad."

Did Charlie Sheen Make a Cameo in the 'Two and a Half Men' Finale? 8

The Latest: Lamar Odom’s Life ‘Will Never Be the Same' 9

Russell Crowe Opens Up About His Split from Danielle Spencer 10