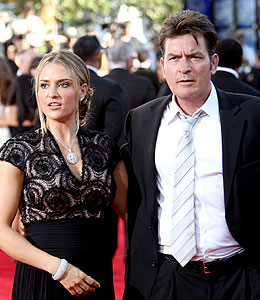 Charlie Sheen won't face a judge until Friday, thanks to a delay because of wife Brooke Mueller's dental surgery.

Sheen, 44, will appear in a Colorado courtroom on Friday at 10 AM to answer charges of felony menacing, second-degree assault and criminal mischief stemming from a Christmas Day fight with wife Brooke Mueller.

The hearing was originally scheduled for Wednesday morning, but according to the Associated Press, Mueller's attorney requested that Brooke be allowed to attend the hearing via telephone from Los Angeles due to a scheduled oral surgery, but the motion was denied and the hearing was rescheduled.

On December 25, Brooke called police and said she was "scared for my life," claiming Sheen had pulled a knife on her and threatened her. Since then, Mueller's attorney has told the press that her client wants to "try to work things out" with her husband.

Charlie and Brooke tied the knot in June 2008. The couple welcomed twins Bob and Max in March 2009.