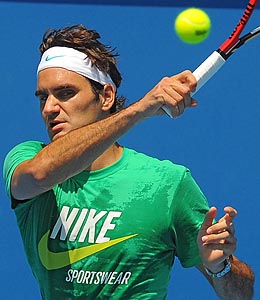 Tennis pro Roger Federer is joining forces with competitors -- including Rafael Nadal and Serena Williams -- to battle on the court and raise money for Haiti.

Federer tells reps from the Australian Open that he's recruited "other top players" for a doubles tennis tournament in Melbourne on Sunday, with all proceeds going to Haitian earthquake relief funds.

"We had the idea that we could do something, you know, to help Haiti after the tragic earthquake," Federer says. "So I spoke to some other top players. I got some connections, you know. They all said, 'Yes, we should do something.'"

The tennis tournament will take place at Melbourne Park in Australia. "We're going to play doubles or mixed doubles tomorrow, also with top women's players, try to fill the stadium," Roger says. "This is where you guys can help. Maybe put it out in the press. I think there will be a donation at the door of $10 to come and see us play."

Federer isn't the first star to break a sweat to help the earthquake victims -- Chelsea Clinton announced yesterday that she plans to raise money for Haitian relief efforts by co-hosting a special 90-minute spin class in NYC.

SoulCycle, the former First Daughter's regular spot for spinning, sent a note out Friday, inviting customers to take part in a 90-minute ride that will be co-hosted by Clinton.

The note reads, "Good Afternoon SoulCyclists, In a time of need, we can always look to our SOUL COMMUNITY to take action. In response to the recent devastation in Haiti, we are doing our best to make a difference. Please join Chelsea Clinton and SoulCycle for a special 90-minute ride on Thursday, Jan. 21 to benefit The Clinton Haiti Relief Fund."

All proceeds from the spin class will go to the Haitian victims.