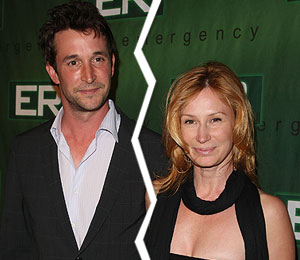 Noah Wyle and wife Tracy have called it quits after 11 years of marriage.

"Tracy Wyle and Noah Wyle, who separated in late October 2009 have confirmed they have entered into a mediation process," rep Eddie Michaels tells "Extra" in a statement. "Neither has legally filed for divorce.

See the biggest celebrity splits from 2009

The actor's rep continues, "Tracy and Noah live in separate residences, however, their two children (Owen, 7 and Auden, 4) see both parents daily."

A source close to the couple tells People magazine, "They're cooperative with each other and have put the interests of their children ahead of anything else."