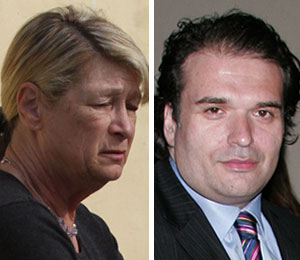 After Brittany Murphy died suddenly on Dec. 20, her mother Sharon and husband Simon Monjack were able to turn to each other for support.

"Simon is exactly as you would expect someone to be who has just lost the woman he loved. Some days he wants to kill himself, and other days he seems to be coping better," Monjack's mother, Linda, tells People magazine. "He is distraught. I speak to him everyday, and he is often in tears."

Linda added, "He's very strong, and he's got Sharon. They're very close, and they're keeping each other going."

After Murphy and Monjack tied the knot in April 2007, Sharon moved in with the couple in their Hollywood Hills home.

Linda says she spoke with her son, a producer/screenwriter, after hearing about Murphy's death. "When she'd died and he got back from the hospital, I spoke to him, and he was in total and utter shock. I could hear Sharon crying in the background. It was heartbreaking."

Murphy's toxicology tests won't be complete for a few more weeks, but Monjack is desperate to know how his wife died.

"Simon's life has been shattered," Linda explained. "He needs closure to be able to get on with it."

How Gwen Stefani Chose Love After Splitting with Gavin Rossdale 6