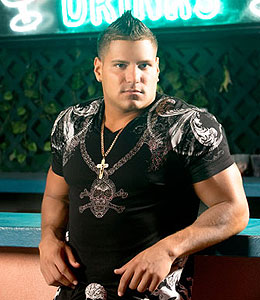 "Jersey Shore" cast member Ronnie Magro was arrested in September after getting into a fight with a man -- while cameras rolled for the MTV show.

Police Chief Thomas Boyd confirms the arrest to People magazine, saying that Magro, 24, was arrested for aggravated assault after he punched a man. Footage of the altercation will appear on the show, of course.

See the "Jersey Shore" girls without makeup on

"I definitely felt out of place," Ronnie tells the magazine of being behind bars. "It's definitely a place I never want to go back to again. Definitely a lesson learned."

Mike Mohl, Chief of Detectives at the Ocean County Prosecutor's Office, says the case is "under review for further action."

Ronnie tells the magazine that the unidentified man provoked him with "racist" remarks about their African-American security guards, and shouted disrespectful things to his pals.

"I really don't feel bad for the altercations that I did get into in Seaside because I'm really not a person who likes to fight," Magro says. "He was just being a drunk jerk, saw the camera ... [and] I think he chased us down like two blocks or something like that. At that point, you're like, 'What am I gonna do?'"

Find out how well the cast knows the Garden State

Magro claims he acted in self-defense. "You'll see throughout the show, we do go out and if we do get into an altercation," he says. "It's us just defending ourselves or reacting to somebody else."

He adds, "People [were] out of hand. I regret getting arrested. I don't regret having the fight."