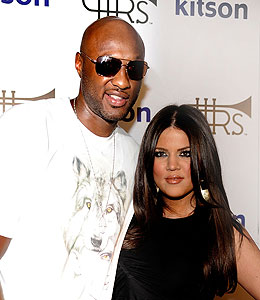 Kardashian, 25, wed Lakers star Lamar Odom in September -- and she says that Odom, 30, "wants to have a baby tomorrow."

Aww! See which celebrity babies were born in 2009

"I want to so badly," Kardashian tells radio host Sean Valentine of having a baby. "I'm 25, I'm not rushing it, I did just get married, and we both want to have kids together."

Khloe admits that while she's not "rushing it," she's not using birth control. "I'm not doing anything to prevent it."

She adds, "I would want a boy, but I don't care. I just feel like there's so many girls in my family."

Check out some of the Kardashian sisters' skimpiest outfits

Kardashian explains that it's been hard to build a relationship with the kids, who live in the Big Apple. "Its hard because I live in L.A. and they live in New York and they're in school right now -- I've met them, but I can't say that I'm close with them."