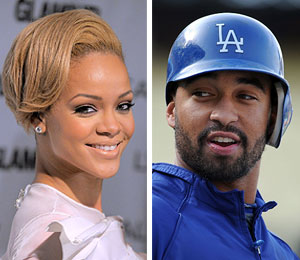 After an unlucky year in love, Rihanna is starting fresh in 2010.

The singer was snapped cozying up to L.A. Dodger Matt Kemp during a romantic getaway to Cabo San Lucas over New Year's Eve. The new couple "couldn't keep their hands off of each other" at the pool, a source tells People magazine.

See other stars who are smitten with athletes

Once back to their patio, Rihanna, 21, and Kemp, 25, "kept kissing while gazing out over the ocean."

The Los Angeles slugger is the first man the pop star has stepped out with since splitting from her abusive ex-boyfriend, Chris Brown.

"Rihanna wants the world to know that she is happy with Matt," an insider explains to the magazine, adding, "They really like each other."

Check out some of Rihanna's wildest looks

Kemp's agent Dave Stewart says his client doesn't have much time to date, but he's enjoying his time with Rihanna. "They've only had a few opportunities to be together, but those times have been fun."

Rihanna and Kemp were introduced by pals in November.