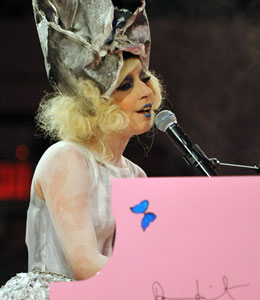 Eccentric songstress Lady Gaga is ringing in 2010 on top!

Sales from NewYearsEve.com estimate the "Bad Romance" singer's Dec. 31 show at the Fontainebleau in Miami Beach is the hottest ticket for New Year's Eve.

Tickets for the bash doesn't come cheap. General admission is $425 while pool cabanas cost $25,000 and have already sold out.

See Lady Gaga and the other 2010 Grammy nominees

Other celebs hosting New Year's Eve parties include Mariah Carey and Nick Cannon at M2 in NYC. In Las Vegas, Christina Aguilera will be partying at TAO, Nicole Richie and Joel Madden will be next door at LAVO and the Black Eye Peas are performing at LAX.