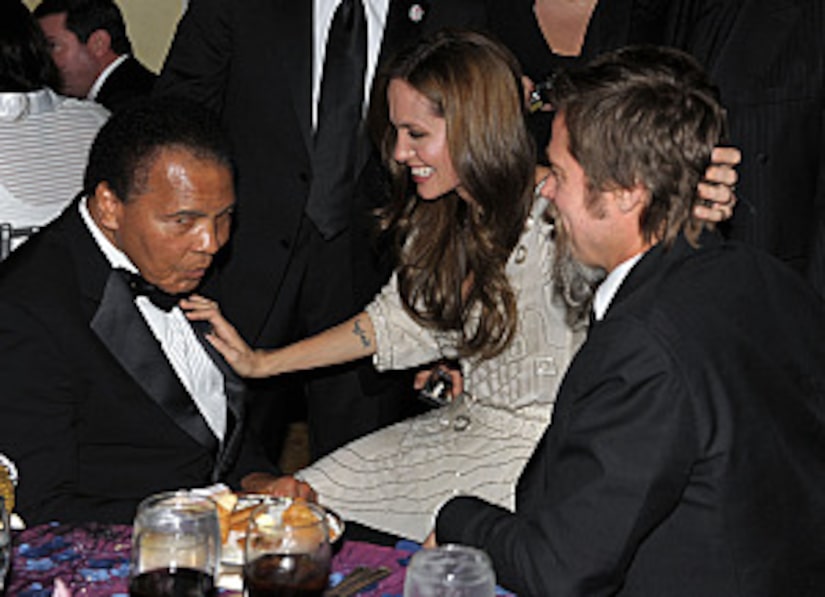 Angelina Jolie and Brad Pitt were the life of the party at a Thursday night charity event.

The couple cuddled and flirted at the UNICEF Ball honoring producer Jerry Weintraub at the Beverly Wilshire Hotel.

Jolie caressed and ran her fingers through Pitt's hair while chatting intently with boxing legend Muhammad Ali, who suffers from Parkinson's disease. She also kept flashing big smiles at her bearded beau.

See photos of Brad and Angie's most romantic moments

It's the second major event the couple -- who have denied split rumors fueled by the release of an explosive book -- have attended within the past eight days.

Last Thursday, they took son Maddox, 8, to the Hollywood premiere of the Nelson Mandela biopic "Invictus" (even though the movie, which stars Matt Damon and Morgan Freeman, is rated PG-13).

Between red carpets and balls, Jolie has gotten serious. She criticizes President Barack Obama's Darfur policy in a new editorial on Newsweek.com.

"I believe President Obama ... will do [his] best to bring peace to the region," Jolie writes before demanding more details about his policy toward the war-torn region.

"How is the Obama administration's approach to Sudan an evolution of justice?" she asks. "In addition, when the administration says it intends to work to 'improve the lives of the people of Darfur,' I would like to know what that means, besides the obvious point that their lives could hardly get worse."

Jolie is no fan of the president. "She hates him," a source told Us Weekly last month.