Looks like Taylor Lautner isn't the only one who got buff for "New Moon." 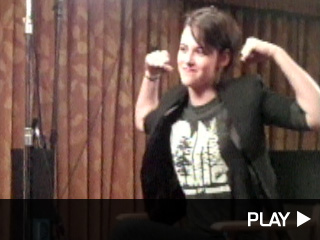 Check out more photos and footage of the "New Moon" cast -- and send "Extra" your red carpet questions!

Lopez asks the "Twilight" star if he could play one of the werewolves in the vampire saga (out Nov. 20).

Stewart's response? He's "got the guns!"