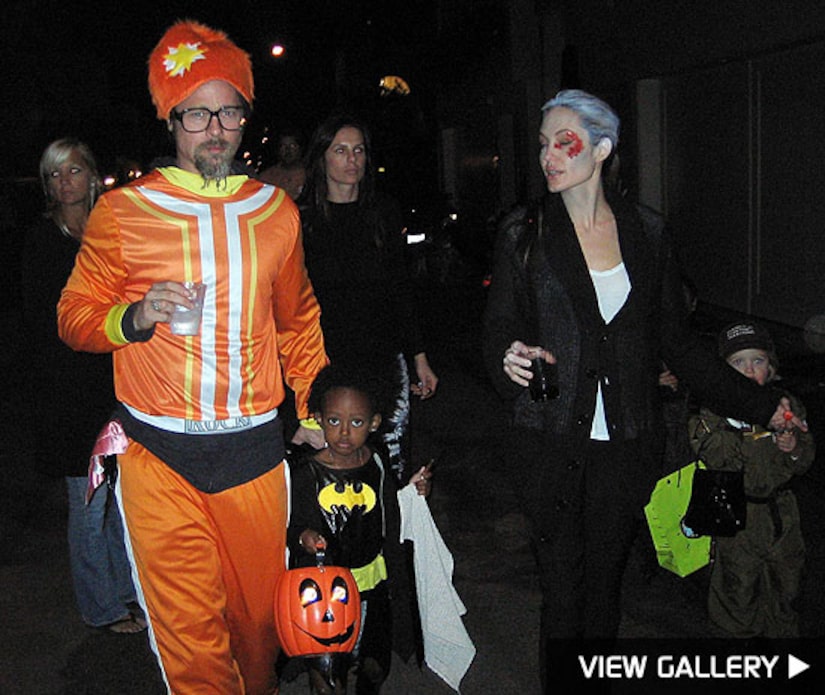 Pitt, 45, dressed as DJ Lance Rock from the kids' TV show "Yo Gabba Gabba," while Jolie, 34, dyed her hair grey and painted blood on the side of her face.

See photos of stars dressing up for Halloween 2009

Zahara, 4, wore a Batman costume, and toted a plastic pumpkin to collect candy. Maddox, 8, and Shiloh, 3, both sported camouflage/military-themed costumes. Pax, 5, was also present, but not photographed.

Check out adorable photots of Brad and Angelina's kids

The Jolie-Pitts apparently had no security while they walked around the neighborhood. Pitt even drove the family himself.

RadarOnline reports that the couple were recognized by fellow trick-or-treaters, but they "had a blast."

The first Halloween celebrations included “play parties,” which were public events held to celebrate the harvest. Neighbors would share stories of the dead, tell fortunes, dance and sing.
Credit: History.com

In the second half of the nineteenth century, America was flooded with new immigrants, including millions who fled Ireland's potato famine of 1846. The immigrants helped popularize the national celebration of Halloween. Americans began dressing in costumes and went house to house asking for food or money, a practice that eventually became today's “trick-or-treat” tradition.
Credit: History.com

In olden times, young women believed they could divine the name or appearance of their future husband on Halloween by doing tricks with yarn, apple parings or mirrors.
Credit: History.com

Put a Ring In It

In 18th-century Ireland, a matchmaking cook might bury a ring in her mashed potatoes on Halloween night, hoping to bring true love to the diner who found it.
Credit: History.com

The American tradition of “trick-or-treating” dates to the early All Souls' Day parades in England. The poor would beg for food, and families would give them pastries called “soul cakes” in return for a promise to pray for the family's dead relatives.
Credit: History.com

I Ain't Afraid of No Ghosts!

It was believed that ghosts came back to the earthly plane on Halloween and people thought that if they left their homes, they might encounter ghosts! To avoid being recognized by these ghosts, people would wear masks when they left their homes after dark so the ghosts would mistake them for fellow spirits.
Credit: History.com

To keep ghosts away from their houses, people would place bowls of food outside their homes on Halloween to keep ghosts happy and prevent their entrance.
Credit: History.com

In Mexico, Latin America and Spain, All Souls' Day takes place on November 2. It's a three-day celebration that begins on the evening of October 31.
The celebration is designed to honor the dead.
Credit: History.com

Many families construct an altar in their homes, honoring deceased relatives. It is decorated it with candy, flowers, photographs, samples of the deceased's favorite foods and drinks, and fresh water.
Credit: History.com

We usually try to avoid crossing paths with black cats, because we feel they will bring us bad luck. This idea has began in the Middle Ages, when many people believed that witches avoided detection by turning themselves into cats.
Credit: History.com