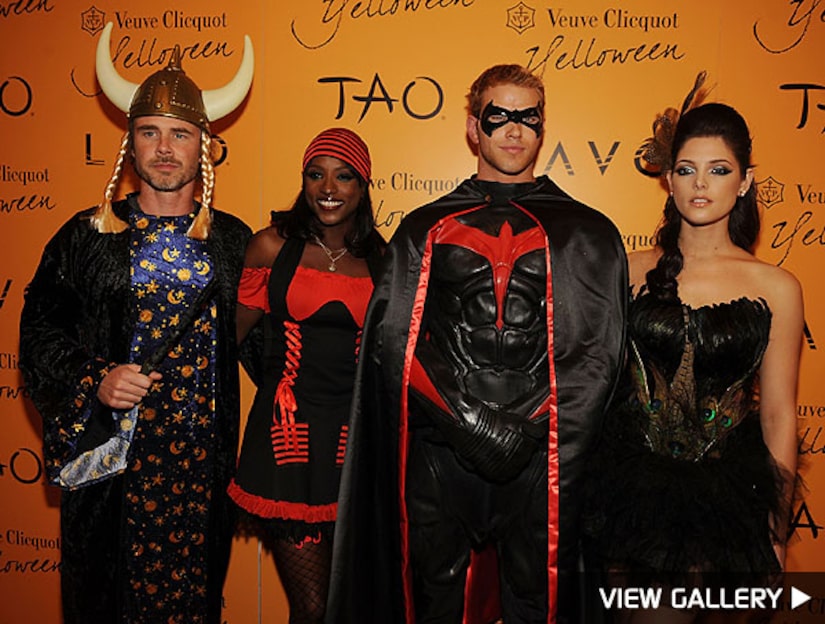 Wesley, dressed as a pirate, and Trammel, wearing a wizard costume, dined on Italian dishes at LAVO before heading to their VIP table at LAVO nightclub.

See photos of celebrities dressing up for Halloween

Lutz, 24, suited up as Batman's sidekick Robin, while Greene, 22, dressed up as a peacock. The "New Moon" stars walked the red carpet together before going to their VIP skybox at TAO.

Check out everything about Hollywood's hottest vampires on Extra's "Twilight" page

This “Halloween” maniac murdered his sister when he was six. It only got worse.

Norman Bates, played by Tony Perkins, made taking a shower the scariest thing you could do at the Bates Motel… or at home! Motherrrrrrrrrrr!

Carrie, played by Cissy Spacek, made the prom a bloody hell. Based on the Stephen King novel.

“A Nightmare on Elm Street” made Freddy a household name… played by Robert Englund. Sleep tight!

Tim Curry of “Rocky Horror” fame plays the creepiest clown EVER in another Stephen King scarefest, “It.” Coulrophobia, anyone?

Kathy Bates terrified both James Caan and audiences as the creepy Annie Wilkes in “Misery.” She got an Oscar, we got the willies.

Harvey Stephens was the embodiment of evil as little Damien Thorn. Kids can be such angels… except when they're fallen angels!

Sir Anthony Hopkins won an Oscar for his portrayal of the cannibal Dr. Hannibal Lecter. Even from behind bars, he manages to torture his visitors. Fava beans, anyone?

Heath Ledger's tormented Joker was the embodiment of the criminally insane… and looked it.

John Kramer aka the “Jigsaw Killer” sets his victims in unusual situations… in multiple sequels!

He wants to suck your blood! Count Dracula played by Bela Lugosi is one of the most famous villains of all time. Make sure you have garlic handy when the sun sets.

Twilight's Edward Cullen is played by heartthrob Robert Pattinson. Just the slightest scent of blood brings out his inner beast.