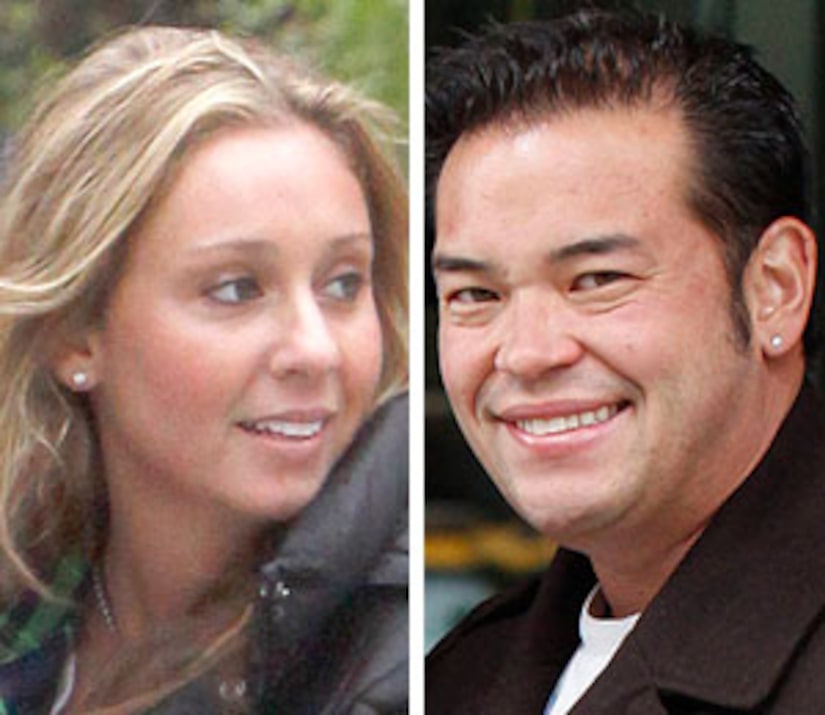 Hailey Glassman has tweeted a big "thank you" to her supportive pals as her relationship with Jon Gosselin falls apart.

"If I'm disliked and hated on, fine," Hailey writes on her Twitter page. "I just want to thank everyone for their support. I was brutally honest and put everything out on the table in front of the entire world"

Earlier this week, Hailey reportedly claimed that the father of eight "emotionally abused" her during their time together. A source close to the couple told "Extra" on Friday that the two were "taking a break."

Gosselin, 32, made the decision to break things off with Glassman, 22, after meeting with the famed Rabbi Shmuley.

Glassman tweeted that she is content with how things worked out, because she was honest. "At least I know in my heart I spoke the truth so now I'm OK with your judgment."

Jon called it quits with his estranged wife Kate in June.

"It appears that Jon's priority is Jon and his interests. My priority remains our children and their well-being."

"We film it separately," Jon admitted. "She has her film crew. And I have my film crew.

"While I certainly have a very different perception of how our marriage dissolved, for the sake of my children I maintain that I'm not going to go into details of aspects I believe should remain private." Kate's statement to ABC regarding how she feels about revealing her personal life with Jon.

Jon also slams his ex for using her wedding ring. "I think she still wears the ring for public perception," he said. "I don't wear my ring because she took my ring. I don't have it." Jon added, "So I laid it down one night. It was gone.

Jon revealed on "Good Morning America" that their marriage "will never be fixed."

"I didn't leave Kate for Hailey. People think I left Kate for Hailey... because of the time frame and what they printed in the tabloids. You can't control who you love. I strongly believe that. You cannot control that. It's two people joined together."

Jon admits in a September interview with ABC that he will always "love Kate as the mother of my kids. But to tell you right now, at this point of what's going on, I do not love Kate."

After being photographed with a few different females in the media, Jon had this to say, "Like most people, I have male and female friends and I'm not going to end my friendships just because I'm on TV."

Jon tells TLC's cameras "People think I've changed, and I have changed, but I'm now the person I know I am."

"I don't trust her anymore," Jon tells reporter Chris Cuomo of ABC. "I was abused... I'm not going back to that lifestyle."

Kate told CBS in an interview, "He does not want to be married to me anymore." Kate said it was not she who initiated the divorce.

In an interview with ABC, Jon said, "Well, excuse me, I'm taking care of the kids. She's on book tours, she's doing all these things. You know, she's gone a week. You know, comes back. Packs up and leaves again. I'm standing there like, 'Oh, OK. Your mom's gone again..."

Kate told CBS cameras, "This is a situation that absolutely would have happened whether the cameras were here or not. I don't want people thinking we traded marriage for fame. Ever."

In an ABC interview, Jon said Kate deliberately "separated" him from his mother and brothers."

Jon said, "I was beaten down so long, I couldn't even make a decision for myself."

Jon says Hailey Glassman, daughter of Kate's plastic surgeon, is someone he loves more than he did Kate -- and that she shows him "love and respect" as Kate never did.

Get the first look at what's coming up in "Extra This Week," along with the
week's top stories, cool prize giveaways and special videos and photo
galleries.