Kelly Osbourne has one wish for her 25th birthday, which is Tuesday -- to last another week on "Dancing with the Stars!" 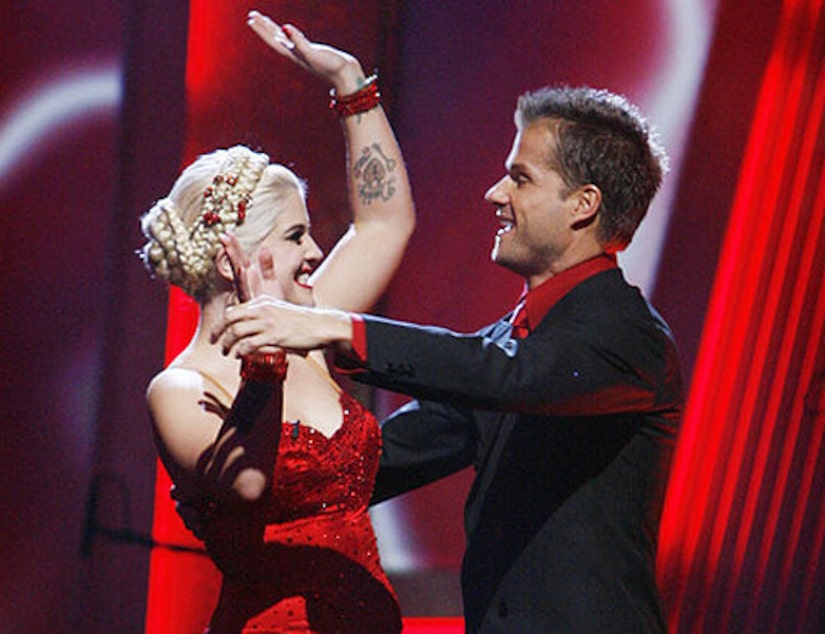 The reality star told "Extra" on Monday night that she's worried about going home on Tuesday's double elimination show after landing in the bottom three. She and partner Louis van Amstel earned just 20 points for their jitterbug.

"If we're in the bottom three, I'll be really upset," she said before competing. "I don't want to go home on my birthday!"

"Iron Chef" host Mark Dacascos and model Joanna Krupa were tied for best score on Monday night's show, with a score of 26 each.

Krupa waltzed with Derek Hough -- who returned for his first show after a bout with the flu -- and was compared a "butterfly gently gliding over an alpine meadow" by judge Bruno Tonioli.

Aaron Carter and Karina Smirnoff placed second with 25 points for their waltz. Donny Osmond, who led the pack with last week's tango, performed the jitterbug with partner Kym Johnson, and despite a few errors, the couple finished with 24 points.

Dancing with the Stars Most Memorable Moments

While Marie waited for judges to rate her samba — she suddenly collapsed! Marie was out cold for about 30 seconds. The live show went to commercial, and when they returned, Tom Bergeron announced that Marie was fine. Marie blamed “bad air” for the fainting spell.

Jane Seymour missed a performance after being rushed to the hospital for food poisoning.

The Show Must Go On

Marie Osmond and Jane Seymour both lost a parent during their time on “Dancing with the Stars.” Jane's mother was 92. Marie's father was 90. Both performers stayed with the show.

Romeo incurred a basketball injury, but his dad, Master P, stepped in for the rapper.

Have a Nice Trip?

Derek Hough stepped on Jennie Garth's dress, causing her to trip and fall, and he followed. Jennie and Derek's spill was the first time in “DWTS” history that someone took a tumble!

“Jackass” star and former clown Steve-O had pain from an ongoing back injury during his time on “DWTS.” “A physical therapist told me that nerves are being pinched in my back and it is in spasm because of inflammation related to torn muscles.” Ouch!

Sara Evans quit “DWTS” because of a divorce scandal with her husband.

Kelly Monaco's straps broke right off her tube top, but she kept on dancing like a champ.

A Cure for the Broken Heart

Melissa Rycroft joined “DWTS” right after she got dumped by “The Bachelor” Jason Mesnick.

Apple co-founder Steve “The Woz” Wozniak had a rough start in the competition. Judge Bruno Tonioli said of his Cha-Cha, "It was like watching a Teletubby going mad in a gay pride parade!"