"Dancing with the Stars" kicked it up a notch this week by introducing dances that have never been performed on the show; the Lambada, Bolero, Charleston and country two-step. Melissa Joan Hart and Mya were clearly leaders, while others failed to master the tricky steps. 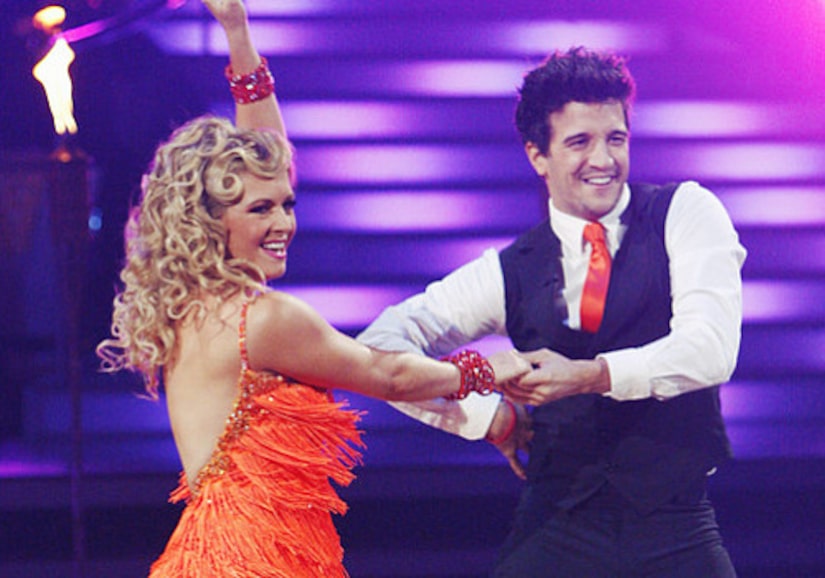 Hart and professional partner Mark Ballas performed an energetic Charleston for the judging panel. The lively dance fit well with Melissa's bubbly personality -- and pleased the judges. Len Goodman told the couple that the Charleston is all about the three Es: energy, excitement and entertainment, and "You ticked all the boxes." Hart earned two 9s, and a 10 from Bruno Tonioli, her best scores of the season.

A scantily clad Joanna Krupa and shirtless partner Derek Hough danced a very sexy Lambada, with a raw and energetic passion that wowed the judges and audience.

Mya and Dmitry Chaplin sizzled during their sexy Lambada, pleasing Bruno and Carrie Ann Inaba, who remarked, "Mya's on fiyah!" Their moves again failed to impress Len, who said that he's expecting more from the twosome on the floor. The singer earned 10s from Carrie and Bruno, and an 8 from Len.

Donny Osmond and Kym Johnson also danced an entertaining Charleston, scoring a 24 -- keeping them in the game, but in 4th place.

Louie Vito and Chelsie Hightower struggled with the country two-step, prompting Chelsie to call in her last season partner, cowboy Ty Murray, to help the pro-snowboarder with his moves. The judges criticized Louie for not dancing, with Len telling him, "It was just a series of walks and then you stopped and Chelsie did something and then you walked again." They earned a disappointing score of 16.

Michael Irvin continued to have trouble on the dance floor with his Bolero with partner Anna Demidova, who requested help from Bolero champ Tony Dovolani. Despite their efforts, the NFL star's moves haven't been improving from week to week. Bruno told Michael his dancing was like the economy -- "Every week it's supposed to be getting better, but nothing happens." They left the floor with a score of 16.

Who will be the next dancer asked to pack up and leave? "Dancing with the Stars" airs tonight on ABC.