Gosselin and his attorney Mark Heller claimed that the reality dad wanted to "pull the plug" on production weeks ago. The network denies Jon's claims. "I've been talking about pulling the plug on this program ever since I became involved," said Heller, adding that he considered the termination of the Gosselin reality show "a done deal."

Jon admitted that it was the network's right to dismiss him from the show, but added, "It's also my right as a parent and as the father of my kids to determine whether the show is good for my family and if it's not for my family."

Gosselin told the talk host that he was adamant about getting his kids off the show. "I don't think it's healthy for them... I had an epiphany one day. I just looked in the mirror and I said I don't want to be this person anymore. I made mistakes. I know I messed up. I do regret a lot of things. But I have to learn from those mistakes and move forward."

Those mistakes, according to Jon, include "trusting" women like Kate Major and Stephanie Santoro, who both claimed to have slept with the father of eight. Gosselin denies their allegations. "I definitely have regrets," Jon says of his actions. "Yes, I'm giving it up because I -- I need to be a father. I need to be a father and I need to take my kids off the show."

Gosselin also used the opportunity to apologize to estranged wife Kate. This week, Jon tried to halt their divorce proceedings with no luck. Mrs. Gosselin's lawyer, Mark Momjian, appeared on the program and said that the divorce case would not be delayed. "It's going to go forward."

Production is currently suspended for "Kate Plus Eight." 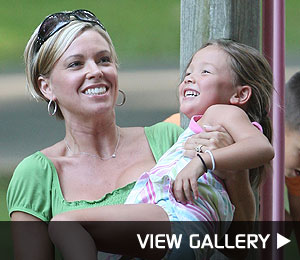