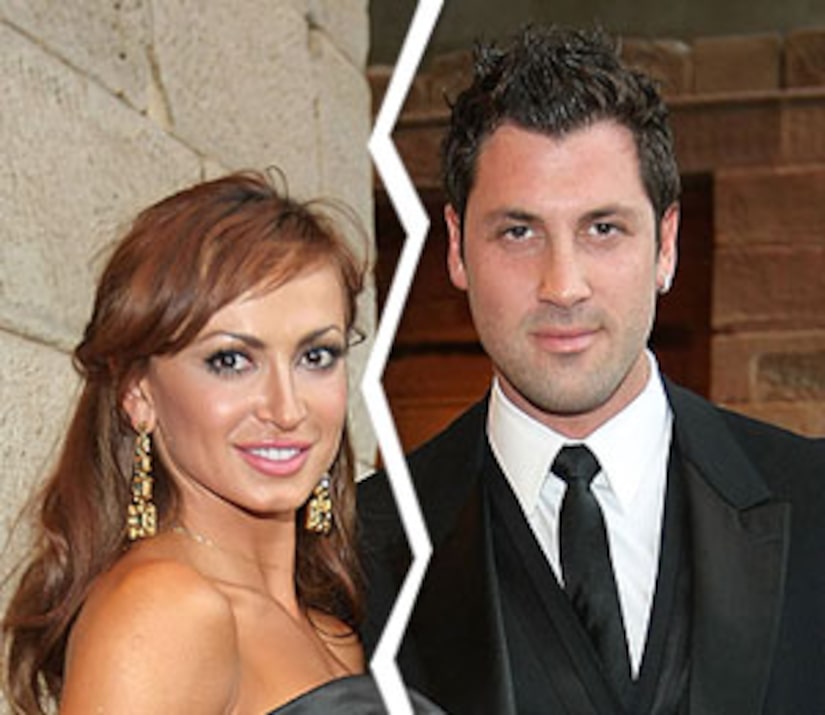 Drama on the dance floor! "Dancing with the Stars" pros Maksim Chmerkovskiy and Karina Smirnoff have split, reports Eonline.com.

Karina's rep tells E!'s Marc Malkin, "I am confirming that they did indeed break up."

After dating for six months, Maksim had popped the question in Las Vegas on New Year's Eve 2009.

Maks and Karina will both compete this season on "Dancing" -- Maksim is paired with "Entourage" star Debi Mazar and Karina is partnered with former pop star Aaron Carter.

Season nine of "Dancing with Stars" premieres September 21 on ABC.

'Dancing with the Stars' Season 9 Partners

The superstar singer will take on the dance floor with Kym Johnson. Osmond's eldest son Don tweeted a congratulatory message to his dad, saying, “@donnyosmond Good luck on DWTS!!! You and Kym are going to win this season. You've got my vote every week! Love ya!”

The fighter and Anna Trebunskaya are paired this season. The two were spotted together leaving rehearsals.

The comedian/actor and Edyta Śliwińska will hit the dance floor together. Ashley's father George Hamilton tells “Extra” he should hold Edyta tight, but to “be careful for Alec, her husband. He'll kill you just like that!”

The “Entourage” actress was paired with Maksim Chmerkovskiy. Debi let the news slip via Twitter when she posted, “Did my 1st day at DWTS! My partner is MAKSIM!”

The pop star turned reality TV star will dance with Karina Smirnoff. The couple was spotted after their intense rehearsals outside of a dance studio in West Hollywood.

The supermodel is paired with Derek Hough. Derek posted a photo on Twitter of the two at rehearsal.