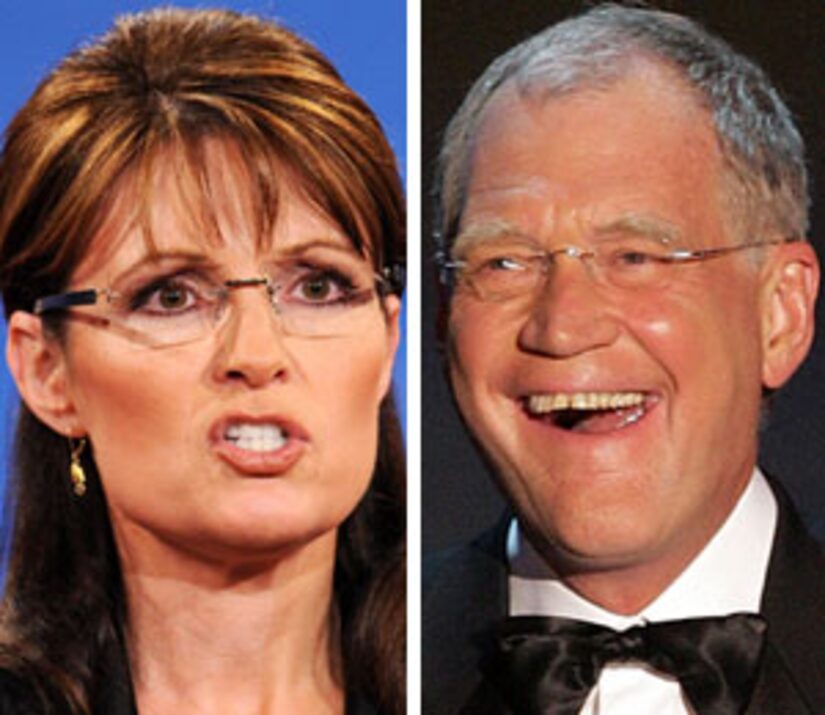 It's a battle of epic proportions! In one corner, there's an enraged mother, Alaska Gov. Sarah Palin... and in the other corner, it's Dave! Palin slammed Letterman for "perverted comments" he made about her daughter during his show, Letterman explained his actions and now Palin is hitting back again!

Last night, Dave said Gov. Palin is a "lovely woman" and he would love to have her on the show. The Palins released a statement in response: "The Palins have no intention of providing a ratings boost for David Letterman by appearing on his show. Plus, it would be wise to keep Willow away from David Letterman." Snap!

The tiff began on Monday night's "Late Show," when Letterman joked that during the seventh inning of the Yankees game, Palin's "daughter was knocked up by Alex Rodriguez."

Letterman followed up with more barbs on Tuesday, joking that "the toughest part of Palin's visit was keeping Eliot Spitzer away from her daughter," managing to insult a sitting and former governor in the same joke.

On Wednesday morning, Gov. Palin unloaded and said Letterman's jokes about her daughter were "disgusting" and "sexually perverted." Palin has three daughters; teen mom Bristol, 18, and Willow 14, and Piper, 8.

The politician released a statement Wednesday saying, "Laughter incited by sexually perverted comments made by a 62-year-old male celebrity aimed at a 14-year-old girl is not only disgusting, but it reminds us some Hollywood/N.Y. entertainers have a long way to go in understanding what the rest of America understands -- that acceptance of inappropriate sexual comments about an underage girl, who could be anyone's daughter, contributes to the atrociously high rate of sexual exploitation of minors by older men who use and abuse others."

Todd Palin has his wife's back -- the hubby added, "Any 'jokes' about raping my 14-year-old are despicable. Alaskans know it, and I believe the rest of the world knows it, too."

Letterman addressed the "fight" between himself and Gov. Palin on the "Late Show" Wednesday night, saying, "I can't really defend these, they're just jokes." He said he completely agrees with the Palins' statements but added, "That's not what I did."

The TV veteran tried to clear the air and said, "These are not jokes made about her 14-year-old daughter. I would never, never make jokes about raping or having sex of any description with a 14-year-old girl."

Letterman continued, "Maybe these are questionable because the girl who actually, excuse me, but was knocked up is now 18 years old. So, the difference there is 14-year-old and of legal age -- okay, I can't really defend the joke. I agree. Unpleasant. Ugly."

"Extra" wants to know what you think. Is Palin overreacting or is Letterman out of line? Vote now!