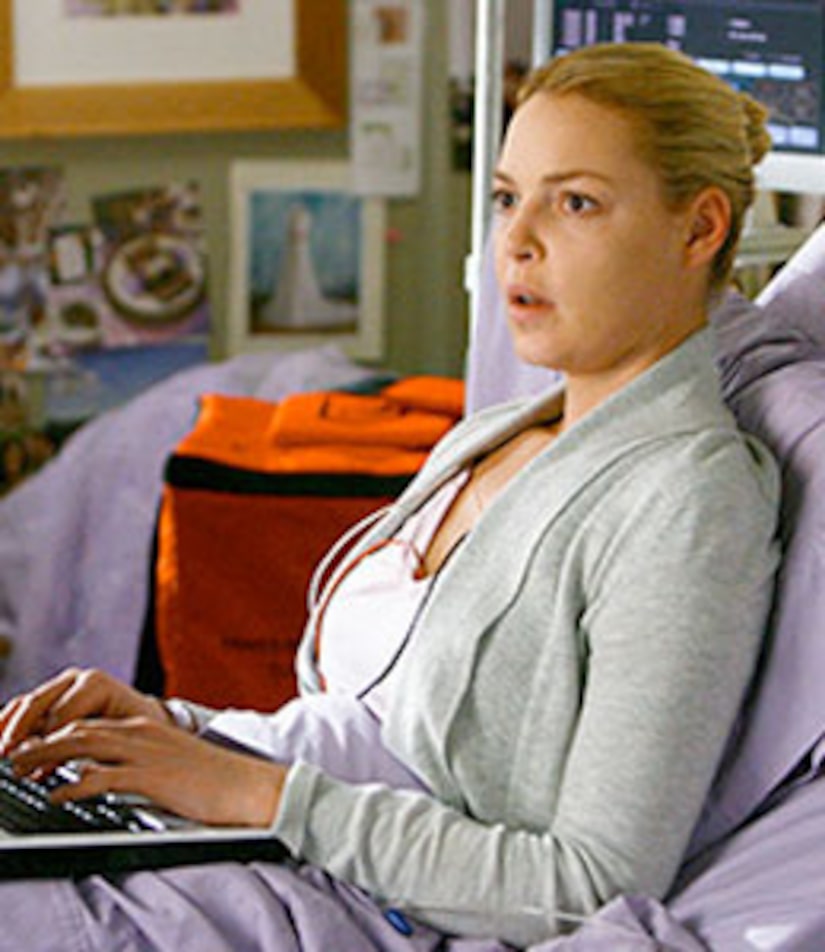 The "Grey's Anatomy" season of ghosts, girl-on-girl hookups, wedding bells and cancer came to a sad and shocking end on Thursday night.

The two-hour season five finale ended in a cliffhanger. Seattle Grace Surgical Resident turned patient Isobel "Izzie" Stevens (Katherine Heigl) had been suffering from metastatic melanoma, and wed Dr. Alex Karev (Justin Chambers) last week in the show's 100th episode. In the finale, Izzie is close to death after a risky surgery to remove her brain tumor. The procedure could rob the bedridden beauty of her memory.

Dr. Meredith Grey (Ellen Pompeo) advises Izzie against the surgery and says,""The tumor is sitting right in the middle of everything that makes you you." Izzie goes through with it anyway and it seems to be a success, but then she is unable to remember anything. She briefly gets her memory back, then embraces Karev and then promptly flatlines.

Don't put away your box of Kleenex just yet! Dr. George O'Malley (T. R. Knight) announced he was planning to enlist in the army as a Trauma Surgeon. The other surgeons wanted to stage an intervention to prevent it, but were sidetracked trying to save a unrecognizable and bloody John Doe patient, who'd been caught under a bus after pushing a woman out of its way. In a surprising twist, Meredith realizes the John Doe patient is actually George when he spells out "007" on her hand. "007" was the nickname given to O'Malley in the first season of hit ABC show. He then died during surgery... or did he?

The episode was a definite tearjerker, but on a lighter note, Grey and Dr. Derek "McDreamy" Shepherd (Patrick Dempsey) finally tied the knot. During last week's episode, the on-and-off again couple gave their elegant ceremony to Izzie and Karev. In the finale, Meredith and McDreamy signed a marriage contract on a Post-It pad a and pronounced themselves husband and wife.

In February, it was rumored Heigl and Knight were going to be written off "Grey's." Castmember James Pickens, Jr. said the actors would be leaving the medical drama. Creator Shonda Rhimes fired back saying talk of the two leaving was "a rumor." Scripts change! Still, it's possible they may be revived in next year's season opener, which likely depends on contract negotiations during the summer.

"Extra" wants to know -- Did you like the season finale?