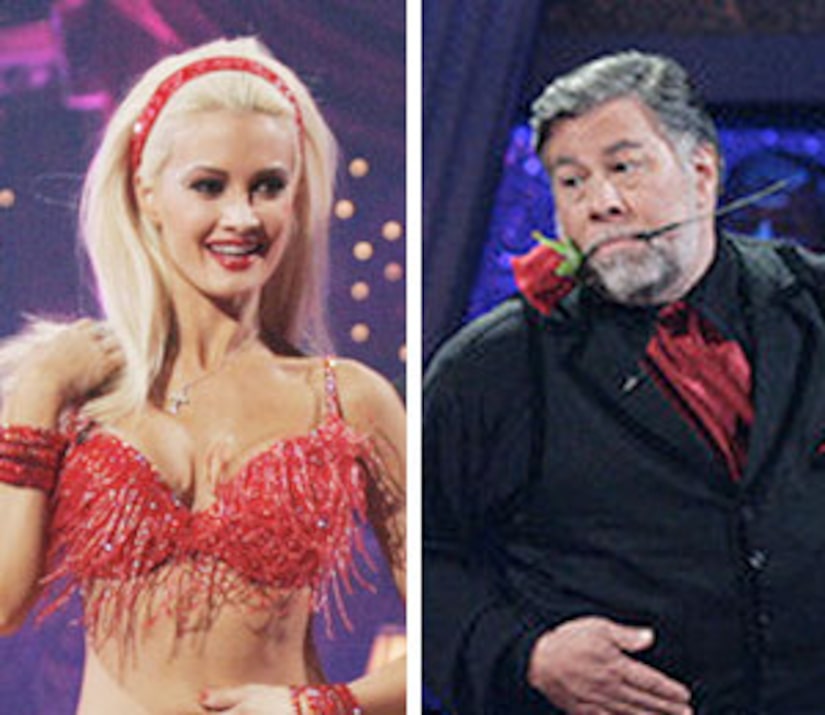 Playboy model Holly Madison and Apple co-founder Steve Wosniak were the two contestants booted from "Dancing with the Stars" on Tuesday during the season's first double elimination.

Wozniak earned the lowest score during the four weeks of competition. Judges gave the 58-year-old and partner Karina Smirnoff a measly 12 out of 30 points for their Argentine tango on Monday night. A week earlier, the pair scored a 10 for their samba.

Judge Len Goodman told the couple, "There is an improvement from last week." He continued, "Last week was so terrible that almost anything that happened would have been an improvement." Judge Bruno Tonioli was blunt and told Woz his tango "really stunk."

The Mac man stayed positive and said performing on the ABC show made him feel like "the luckiest person in the world."

Madison forgot part of her Argentine tango on Monday and earned a 16 out of 30. "It was a bad start, and it kept getting worse," Tonioli sniffed. The "Girls Next Door" reality star and pro partner Dmitry Chaplin beat Steve-O by one point, but their votes were not strong enough to keep them in the competition.

The 29-year-old blonde stepped in to replace Nancy O'Dell, who injured her knee before the show started. Holly said she had "so much fun" and that her favorite part of the competition was the elaborate costumes.