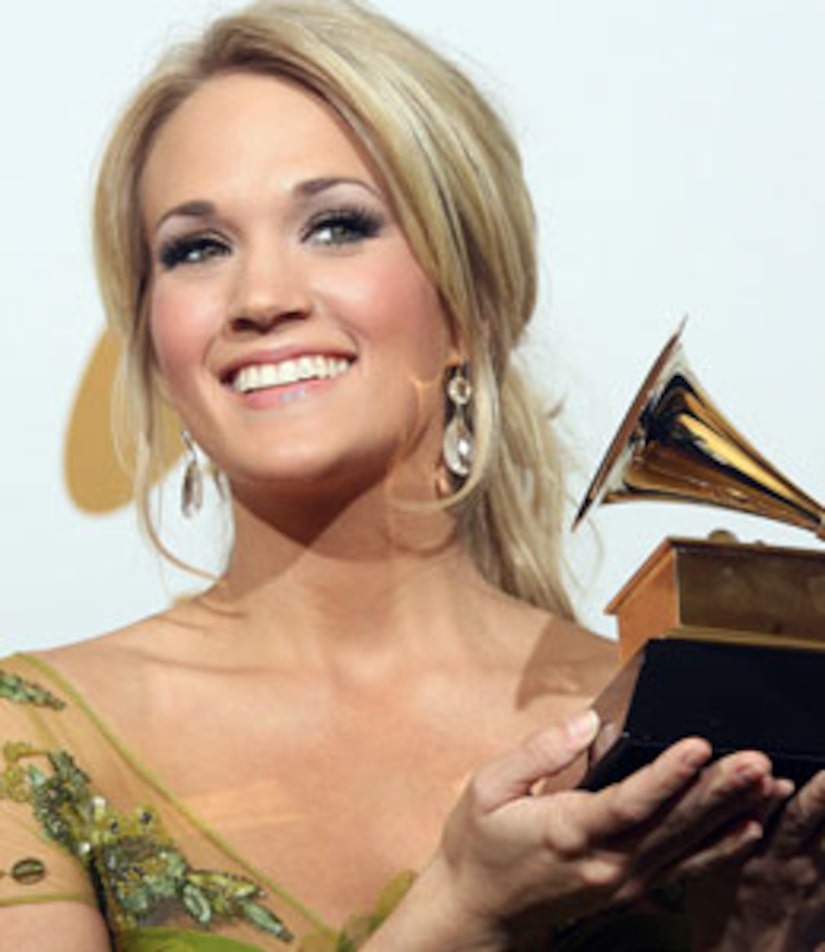 Here's a list of the 2009 Grammy winners! We've included the nominees, with winners in bold.

RECORD OF THE YEAR

ALBUM OF THE YEAR

"Viva La Vida or Death and All His Friends," Coldplay

"Year of the Gentleman," Ne-Yo

SONG OF THE YEAR

"I Kissed A Girl," Katy Perry

"That Was Me," Paul McCartney

BEST POP PERFORMANCE BY A DUO OR GROUP WITH VOCALS

"Waiting In The Weeds," Eagles

"Won't Go Home Without You," Maroon 5

"If I Never See Your Face Again," Rihanna and Maroon 5

"I Dreamed There Was No War," Eagles

"Jingle All The Way," Béla Fleck & The Flecktones

"The Spice Of Life," Earl Klugh

"A Night Before Christmas," Spyro Gyra

"Long Road Out Of Eden," Eagles

"Ready For The Floor,"Hot Chip

"Bring Ya To The Brink," Cyndi Lauper

"In The Swing Of Christmas," Barry Manilow

"I Saw Her Standing There," Paul McCartney

BEST ROCK PERFORMANCE BY A DUO OR GROUP WITH VOCALS

"Long Road Out Of Eden," Eagles

"Sex On Fire," Kings of Leon

"Inside The Fire," Disturbed

"Heroes of Our Time," DragonForce

"Under My Thumb," Ministry

"Hope (Live For The Art Of Peace)," Rush

"Viva La Vida or Death and All His Friends," Coldplay

"Only by the Night," Kings Of Leon

"Consolers of the Lonely," The Raconteurs

"Me, Myself And I," Beyoncé

"You're The Only One," Eric Benét

"Take You Down," Chris Brown

BEST R&B PERFORMANCE BY A DUO OR GROUP WITH VOCALS

"Stay with Me (By The Sea)," Al Green Featuring John Legend

"In Love with Another Man," Jazmine Sullivan

"The Way I See It," Raphael Saadiq

"Year of the Gentleman," Ne-Yo

BEST RAP PERFORMANCE BY A DUO OR GROUP

"Wish You Would," Ludacris Featuring T.I.

"For These Times," Martina McBride

"What I Cannot Change," LeAnn Rimes

"This is Me You're Talking To," Trisha Yearwood

"You're Gonna Miss This," Trace Adkins

"Letter To Me," Brad Paisley

BEST COUNTRY PERFORMANCE BY A DUO OR GROUP WITH VOCALS

The SteelDrivers, "Blue Side of the Mountain"

"Around the Bend," Randy Travis

"Heaven, Heartache and the Power of Love," Trisha Yearwood

"The Ultimate Collection / Live At The Ryman," Earl Scruggs With Family & Friends

"Honoring The Fathers Of Bluegrass: Tribute To 1946 And 1947," Ricky Skaggs & Kentucky Thunder

"If Less is More ... Nothing is Everything," Kate McGarry

"Seven Steps to Heaven," Till Bronner

"Shall We Gather at the River," Take 6

"We Need Each Other," Sanctus Real

"Rock What You Got," Superchick

"What If We," Brandon Heath

"Down in New Orleans," The Blind Boys of Alabama

"Take it Back," Dorinda Clark-Cole

"Deitrick Haddon Presents . . . Together In Worship," Voices Of Unity

"The Fight of My Life," Kirk Franklin

"Back on the Streets... Taste of Spanish Harlem Vol. 2," New Swing Sextet

"All That Jazz...," Tortilla Factory

"Heir to the Throne," Albert Zamora

"The Blues Rolls On," Elvin Bishop

"All Odds Against Me," John Lee Hooker Jr.

"Strangers In Another Country," Rosalie Sorrels

"All I Intended To Be," Emmylou Harris

"Dancing In The Light," Lakshmi Shankar

"Back To Back Hall Of Fame Polkas," Walter Ostanek & His Band, Jerry Darlak & The Touch And Bob Kravos & His Band

"Let The Whole World Sing," Jimmy Sturr And His Orchestra

"Around The Campfire," Buck Howdy With BB

"I Am America (And So Can You!)," Stephen Colbert (& Various Artists)

"When You Are Engulfed In Flames," David Sedaris

"For Your Consideration," Kathy Griffin

"It's Bad For Ya," George Carlin

"Songs of the Bushmen," Harry Shearer

"Indiana Jones And The Kingdom Of The Crystal Skull," John Williams, composer

"There Will Be Blood," Jonny Greenwood, composer

"Ever Ever After," Alan Menken & Stephen Schwartz, songwriters (Carrie Underwood)
Track from: "Enchanted"

"The Adventures Of Mutt,: John Williams, composer (John Williams)
Track from: "Indiana Jones And The Kingdom Of The Crystal Skull"

"Down In The Valley," Frank Macchia, arranger (Frank Macchia Featuring The Prague Orchestra)
Track from: "Landscapes"

"Johnny One Note," Don Sebesky, arranger (John Pizzarelli)
Track from: "With A Song In My Heart"

PRODUCER OF THE YEAR, NON-CLASSICAL

Nigel Godrich
In Rainbows (Radiohead) (A)

PRODUCER OF THE YEAR, CLASSICAL

"In a State of Jazz," Marc-André Hamelin