Superstar couple Brad Pitt and Angelina Jolie hit the City of Angels for the world premiere of "The Curious Case of Benjamin Button," and the two were joined by two of Pitt's biggest fans -- his parents! 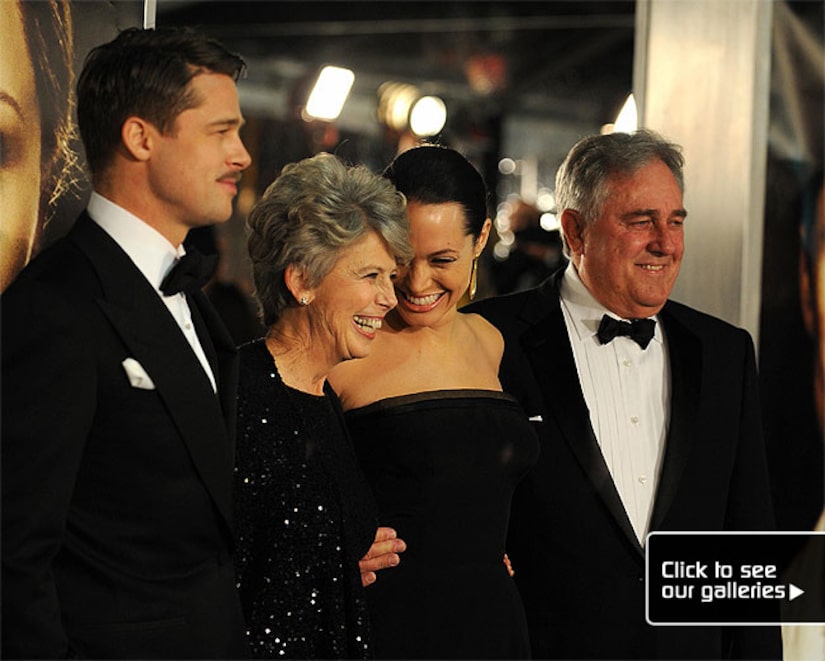 "My parents are coming here tonight," Brad revealed. The premiere also served as a pre-birthday bash for Pitt, who turns 45 next Thursday. So what's his greatest achievement so far? "He makes beautiful children," Angie gushed to "Extra." The actor's mom chimed in, praising Brad's work in the film. "It's so beautiful -- so touching," Mama Jane said of the flick.

Brad isn't shying away from his age -- rather, the proud pop of six is embracing getting older. "I like the wisdom that comes with age," Pitt admits. "I wouldn't trade it for youth any day." Rumors are circulating that Angelina gifted the actor with a motorcycle for his birthday -- but Brad nixed those reports. "That's not true -- not true at all," Pitt confirms.

Last week, Brad convinced Ellen DeGeneres to send Chippendales dancers to the office of his good pal and "Oceans" co-star, George Clooney. Now, is Pitt afraid of revenge from Clooney? "It's like a pre-emptive strike because it's coming anyway, so you gotta get something."

Pitt also revealed that Clooney has been snagging style tips from him! "He's a handsome boy, what can I tell you?" Brad says. "I can't get this guy out of my slipstream -- I get a mustache. He gets a mustache."