Last night on "Dancing with the stars" Brooke Burke, Lance Bass, and Warren Sapp went head-to-head in the finals. It was the last chance for the stars to win over the vote with the "Samba Smackdown" and a freestyle round. 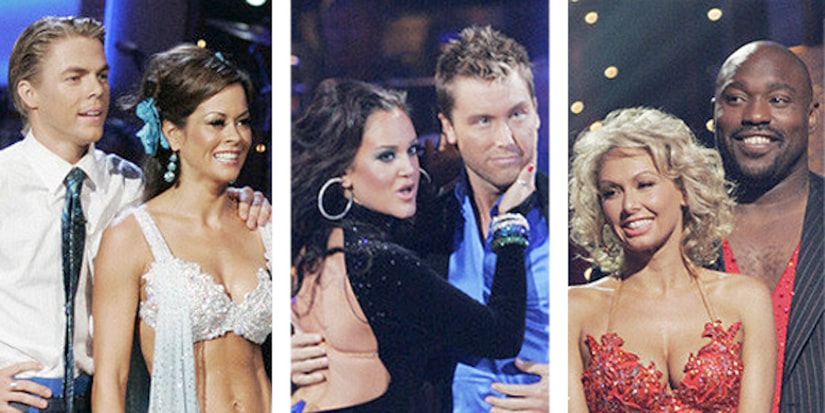 Brooke Burke proved she won't go home without a fight, as she and partner Derek Hough had no problem with their samba and made the freestyle round look like a piece of cake. The couple grooved to "Grease's" "The One That I Want" with lifts, spins and acrobatics. Judge Carrie Ann Inaba praised the partners, saying they totally "brought it," and Len Goodman was impressed, saying it was the best freestyle he's ever seen. The judges scored the couple with 10s all around -- a perfect 30! Brooke's final score for the night was 58/60.

*NSync star Lance Bass and Lacey Schwimmer also showed the sexy samba was a cinch, but they had a hard time winning over the judges in the freestyle round, for which Lance and Lacey aka Lancey, brought back some of Bass's boy band dance moves. The couple danced hip-hop to Run-DMC's "It's Tricky" and even incorporated a smidge of the cha-cha. Judge Bruno Tonioli enjoyed the creativity while Carrie Ann loved the beginning and the end, but not the splash of cha-cha in the middle. Lancey scored a disappointing 27 and 53/60 overall.

Superbowl Champ Warren Sapp is a smooth operator on and off the field. In the freestyle round, Sapp and partner Kym Johnson started out slow with "Rolling on the River" and then they stripped down to a sped up version of the tune. Carrie Ann said it was her favorite routine, but she saw a mistake with an expression on Warren's face. Len gave the couple a 10 "for entertainment" and the couple tied with Lancey with 53/60 for the night.

The selection of the "Dancing with the Stars" champ is in the hands of the fans, with the winner to be announced after Miley Cyrus and Alicia Keys perform tonight. Find out who takes home the coveted mirrored ball -- tonight on ABC!

"Extra" wants to know who you think will win! Click here to vote!