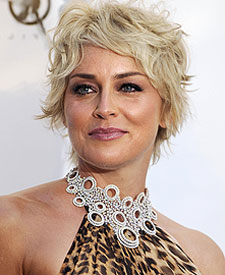 Actress Sharon Stone has reportedly found a new boy toy -- half her age! According to In Touch Weekly, the 50-year-old Oscar nominee has been cozying up to 24-year-old Chase Dreyfus.

"Sharon called him and he showed the caller ID to everyone," a source tells the mag. "She's really into him and even asked him to come with her to Mexico."

The pair -- first spotted together at a Christian Audigier shindig earlier this month -- met while working together on Stone's charity, Planet Hope.

Will Simon Cowell Make a Surprise Appearance on the ‘AGT’… 9