Barack Obama in bed -- with Tyra Banks?! Not quite. The supermodel and a Barack-alike donned Harvard sweatshirts -- the Illinois senator's Law School alma mater -- and posed under the covers for an upcoming issue of Harper's Bazaar. 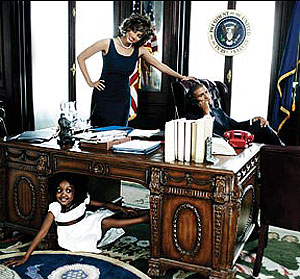 "Extra" was behind the scenes with the "America's Next Top Model" host -- dressed as First Lady hopeful Michelle -- recreating the famous fist bump and joking with her Obama model! "You know what? Roman, you're fine," Tyra kidded, "but Michelle's man is finer than you."

Although the fierce talk hostess was all smiles on set, she admitted to Harper's that she broke down in tears of joy when Barack nabbed the Democratic nomination. The pix -- also snapped in the "Oval office" -- is an homage to a famous JFK and John-John photo.