She's the former teen mistress whose affair with Christie Brinkley's now ex-husband made world headlines, and only "Extra" has explosive video of Diana Bianchi. 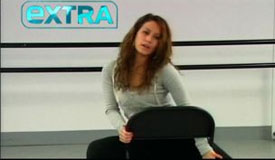 In the footage shot just after her affair destroyed Cook's marriage, the aspiring singer is seen in the recording studio, cutting music about Cook, including lyrics like, "I once was hurt before... I've got to move on. I've got to be strong." Bianchi is also seen cruising to the Hamptons in a Range Rover and rehearsing dance moves.

"Extra" also has an explosive interview with songwriter and music consultant Tasha Covington, who helped put together a dream team to launch Bianchi's music career.

Covington tells "Extra" that in the wake of the Brinkley-Cook scandal, Bianchi walked away from million-dollar recording offers. "She actually had a couple of deals on the table. Major labels wanted her," Covington said.

Bianchi, now 21, testified in court that Cook paid her $300,000, widely reported as hush money. Covington says Bianchi was in love with Cook, but now regrets the affair.

See the tapes only on "Extra" -- tomorrow!