Kevin Federline, father of four, is the Father of the Year! Britney Spears' ex earned the award at club Prive in Las Vegas last Friday night, according to Us Weekly. K-Fed said, "I'm surprised." He has two children with Britney, and two with ex Shar Jackson. 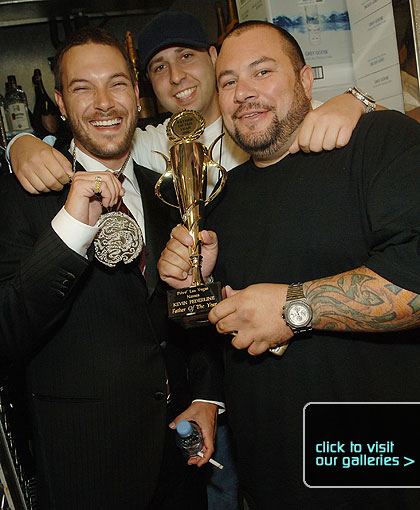 Federline, 30, went to the club with a group of male pals, including divorce attorney Mark Vincent Kaplan, just before 1:00 AM Saturday morning. The club presented K-Fed his trophy "someplace quiet," so as not to draw attention, according to a source. Federline was also named "Power Player" last year.

Britney was also in Sin City, but was hanging out with her father and an assistant at the Cinevegas party at Palms Place, says Us Weekly. Brit filed for divorce from K-Fed in November 2006. He later obtained full custody of their two children, Sean Preston and Jayden James.