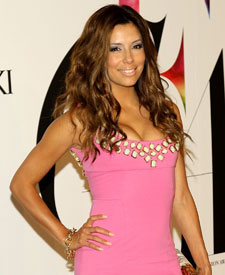 Despite recent photos of the "Desperate Housewives star" wearing loose-fitting clothing at Ferragamo boutique in NYC, which showed salespeople pointing at her stomach, Eva Longoria is not ready to have a baby.

"Eva is not pregnant," her stylist Robert Verdi told People magazine. "I'm not her gynecologist, but I am her stylist," he dished. "I see her naked. I see her boobs! That's the first place it would show, and it's not showing!"

Verdi, who was with Longoria in the Ferragamo boutique, says the photos of Longoria were misleading. "Eva was holding a handbag that she bought in the crook of her arm," he said. "The manager came over and said to her, 'I love that bag.' But in the photos, it looks like the woman is gesturing to her midsection. It's too funny."

Eva had to deny rumors earlier this year during the writer's strike, saying, "I've been cooking and eating, cooking and eating. I keep telling everyone that I've gained 10 pounds just being on strike." Eva and NBA husband Tony Parker wed in Paris last July.