"Extra" caught up with "Grey's Anatomy" star T.R. Knight at West Hollywood hotspot, The Abbey, where he was celebrating the kick-off of National Gay Pride month. The 35-year-old actor opened up about his relationship with 19-year-old boyfriend, Mark Cornelson -- and answered rumors about their reported plans to walk down the aisle. 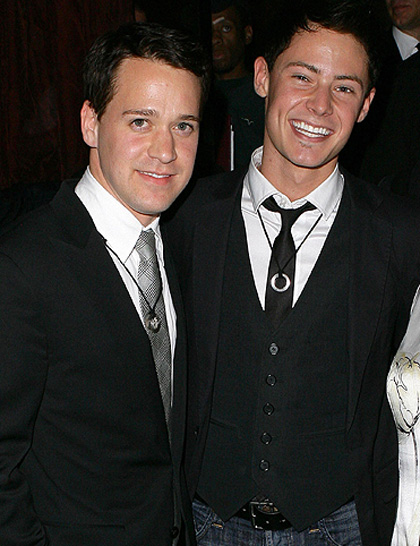 Knight nixed the story, saying that the two are not set to wed, saying, "We've only been together for six months, so I think it's a little soon to consider marriage."

Although the 16 year age difference doesn't bother the Emmy nominee, he dishes, "It's bound to raise some eyebrows, but we love each other. He's an amazing guy." He laughed, adding, "I was surprised he was interested!"

Even though he's not ready to tie the knot, Knight plans to do so someday. "I think it's very important to honor marriage. I take it very seriously. And I'm glad I can finally take it seriously." Gender-neutral marriage licenses will be issued in California beginning June 17.

Check out LoveandPride.com for the hottest trends in gay-friendly fashion, design and jewelry.