Sunday's massive fire at Universal Studios took nearly 12 hours to extinguish, and now authorities are examining why low water pressure may have contributed to the blaze of unknown origin, which leveled historic sets and left a toxic cloud of black smoke over the San Fernando Valley. 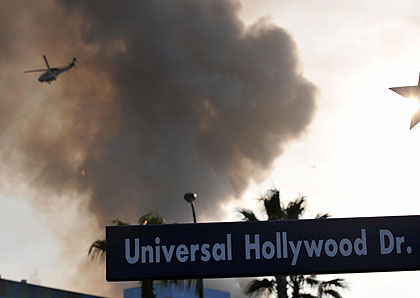 "The water pressure situation was a challenge," Los Angeles County Fire Chief Michael Freeman said. "This fire moved extremely fast," the chief told the AP. The studio's adjacent theme park and tour were finally closed after several delayed openings, with hundreds turned away. Shooting on "Ghost Whisperer" and other shows may be delayed due to the lost sets.

Nine firefighters and a sheriff's deputy sustained minor injuries; the deputy in a large explosion from a video vault. The studio's facades of New York street, seen in thousands of films, including the recent "Spider-Man 2," went up like matchsticks. The well known courthouse square from "Back to the Future" was also damaged in the fire, which encompassed nearly two city blocks.

Universal City Walk, a major tourist attraction and shopping site, was also closed for the day. Losses are in the millions. Amazingly, firefighters kept the blaze from igniting the dry brush in the nearby Hollywood Hills.