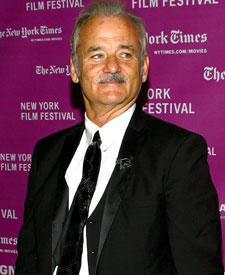 Funnyman Bill Murray's wife thinks their marriage is no laughing matter -- she wants to split from the actor because of his "adultery, addiction to marijuana and alcohol, abusive behavior, physical abuse, sexual addictions and frequent abandonment," reports the NY Post.

Jennifer Butler Murray filed divorce papers against the Oscar-nominated actor in the Charleston County Family Court on May 12.

The couple married in 1997. Two years ago, Jennifer moved the couple's four children away from the "Lost in Translation" star, and into a separate house, reportedly because of his infidelity and substance abuse problems.

In the court papers, Butler Murray alleges that Bill "hit his wife in the face and then told her she was 'lucky he didn't kill her.'"

Murray didn't return calls to the Post -- the actor does not have a publicist or agent. Who you gonna call?

Denise Richards Sets the Record Straight on Reports She Quit… 6