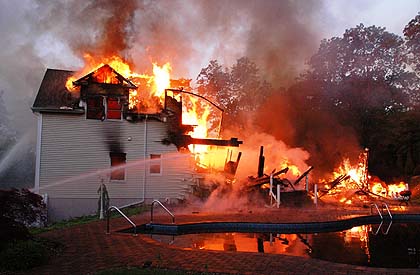 "I would say there is a strong -- a strong, strong -- possibility that it is suspicious," said Larry Feld, the Dix Hills Fire Department Chief, adding, "The home was totally gutted."

The rap mogul's $1.4 million pad has been at the center of a lawsuit between Fiddy and ex-girlfriend Shaniqua Tompkins -- who the 32-year-old "Candy Shop" singer tried to evict from the home, along with their 10-year-old son -- unless she coughed up $4,500 a month in rent.

A rep for 50 Cent -- whose real name is Curtis Jackson -- could not be reached.

The Palin Family Brawl in Alaska: Listen to Bristol Describe Her… 9