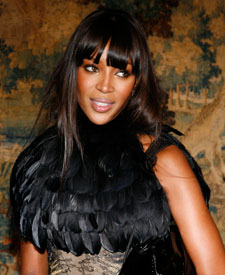 Hot-tempered supermodel Naomi Campbell is again in hot water for her notorious diva behavior. The runway icon arrived at a Heathrow Police Station to be charged over an alleged incident at Heathrow Airport, reports Sky News.

Sources say Campbell will be formally in the April 3 confrontation, in which she allegedly assaulted a police officer after getting into a heated dispute with airport officials -- over luggage. The 38-year-old was reportedly aggressive and abusive to airport staff and police.

Last year, Naomi was memorably sentenced for throwing a cell phone at her housekeeper, and served five days of community service in New York -- which included mopping, sweeping and scrubbing toilets -- which she completed with a gowned departure for waiting photogs.