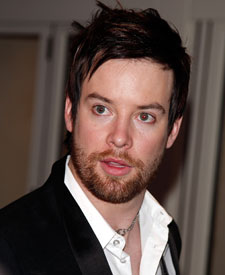 David Cook is the American Idol on a mission! While the scruffy new "Idol" champ burns up the charts with a record 11 songs debuting in the Billboard Hot 100, he is using his overnight fame to turn the spotlight toward curing cancer. David's older brother, Adam, has been battling brain cancer for 10 years. "It's obviously a big issue for everybody," said Cook, "he's doing well."

At the "Today" show this morning with runner-up David Archuleta, Cook gave "Extra" an exclusive update on his "Idol" comrade, Luke Menard, who is currently battling Stage 2 Hodgkin's Lymphoma. Just before being crowned the newest "Idol" champ last week, Cook visited Luke at a Los Angeles hospital. "Luke's doing well... and on the road to recovery," said Cook, adding, "I've never known Luke to have anything but great spirits."

The "AI" alums became chummy during "Idol's" Hollywood week. "Luke and I are the only two that made it to the top 24 from Omaha," says David, "so we had kind of a little bit of a long journey, but it was nice."