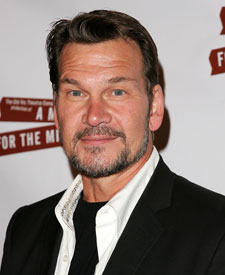 Patrick Swayze isn't letting pancreatic cancer slow him down. The actor has responded well to treatment for his cancer, and therefore has been able to live a full and active life -- including taking in a Lakers game last weekend.

Swayze, 55, announced in March that he was diagnosed with pancreatic cancer, and is being treated at Stanford University Medical Center. There has been an outpouring of support for the "Dirty Dancing" star, including wishes from from his "Dancing" co-star, Jennifer Grey. Swayze and wife Lisa will celebrate their 33rd wedding anniversary in June.

In a statement released to People magazine, Swayze says, "Lisa and I have been back and forth from New Mexico enjoying the arrival of spring and new baby calves... in the meantime, I am continuing treatment at Stanford and the great news is I continue to respond well."