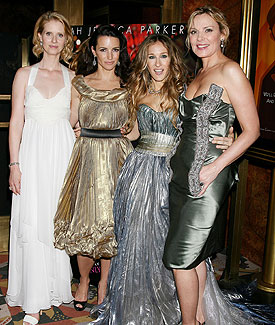 The fab four are back in the Big Apple! "Sex and the City" finally had its wildly anticipated New York City premiere last night. Celebrities and fans alike were dressed to impress -- but even as fashions sparkled, the premiere took a turn for the worse when fashionista fans realized that a ticket mishap left them with no place to turn, reports the NY Daily News.

Security officials reportedly said that up to 2,000 people -- who had obtained tickets through promotional giveaways -- were shut out of the screening. Ushers at Radio City pointed out that the fine print on the rejected tickets said that seating was first come, first served.

Even star Cynthia Nixon, who plays Miranda in the hit HBO series, was surprised by the scene at Radio City Music Hall. "I hope my mom gets in," Nixon said.