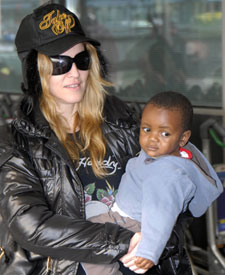 A judge in Malawi has finalized one of the most watched adoptions in the world. Madonna's adoption of David Banda is official, after a long process that brought international coverage of the tiny nation wracked by AIDS deaths, leaving an estimated one million orphans.

Banda, 3, has been with Madge and husband Guy Ritchie since October 2006, reports Us Weekly. "We are very happy with what the judge has ruled," the Material Girl's lawyer told reporters in Lilongwe, the country's capital.

The finalized adoption follows the premiere of Madonna's documentary on the Malawi crisis, "I Am Because We Are," which garnered fine reviews for its stoic and moving images of the youngest victims of Africa's AIDS crisis.