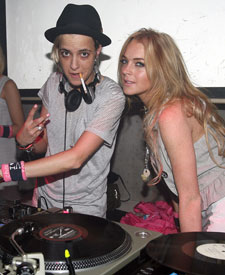 It's sleepover time! Lindsay Lohan and DJ friend Samantha Ronson apparently love spending time together so much that, according to the New York Post, they're already co-habitating.

The rumored move-in is reportedly due to Sam wanting to help Lindsay in her quest to remain sober. The report comes amid Internet whispers that the "friends" are actually engaged.

Lohan's little sis Ali continues to deny the lesbian rumors about her "Mean Girls" star sister and her BFF, telling "Extra" that the two "are just friends," said Ali, adding, "It's pathetic what people say."