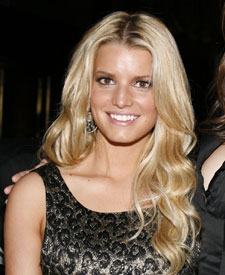 Jessica Simpson and Tony Romo had a romantic dinner at N9NE Steakhouse in Dallas over the weekend, fueling rumors that the reportedly feuding duo has patched things up.

"They were holding hands, in a good mood, and happy," a source tells People magazine, "they looked like they were on a date together."

Simpson and the Cowboys hunk were last spotted together at Ashlee Simpson's wedding, where a source told People they were "kissing and holding hands throughout the night."

After the rocker nuptials, however, Jess took off with her parents to Mexico without Tony in tow, strengthening breakup rumors already circling.