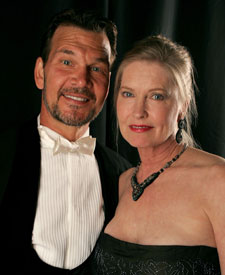 Patrick Swayze continues his battle against cancer -- and now, "Extra" spots the Hollywood star as he boards his personal plane. The avid pilot is heading to Stanford University for the next step in his treatment for pancreatic cancer.

A source tells Us Weekly that "things are going well for Patrick -- he's fighting the good fight and doing well."

Swayze's wife of 32 years, Lisa, is also one of the actor's biggest supporters -- and helping him fight his battle. The couple reportedly just renewed their wedding vows, enhancing their already rock-solid relationship.

Fans and friends alike are keeping their hopes up for Hollywood's bravest leading man, who is also the center of another buzz -- about a "Point Break" sequel! Health permitting, Swayze is reportedly interested in reprising his role of bad-boy surfer Bodhi. The film will shoot in Singapore and Indonesia.