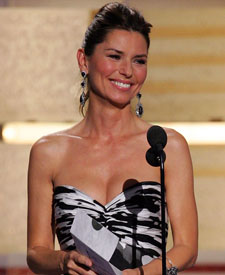 Marie-Anne Thiébaud has been accused of breaking up the marriage of country singer Shania Twain and her hubby, Mutt Lange. Now, the couple's former secretary is firing back against the allegations, reports Us Weekly.

Marie-Anne was contacted at her home in Geneva by E! News, and she denied the allegations. "I know what you're ringing to ask me about -- but, when marriages break up they break up for all sorts of complicated reasons, it's never just one reason," said Thiébaud, "and those reasons should be kept private. If you're looking for a person that broke up a marriage then you have the wrong person -- I'm not that person."