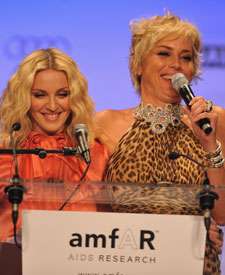 This Cannes Film Festival wasn't as much about movie openings - as it was about opening bids! Sharon Stone hosted the amfAR Annual Charity benefit for AIDS research. The auction raised $10 million - with the help of an auctioned private concert with Madonna that sold for $560 thousand!

The star-studded event brought Hollywood A-listers out of the movie premieres in the south of France. "We have P. Diddy...Sean Penn...Christian Slater," said Stone, "We have a lot of big, big stars here tonight."

"I would like to thank amFAR for all the amazing work they've done over the past few decades," Madonna announced. The devastation of AIDS in Africa became a subject close to the Material Girl's heart -- she premiered "I Am Because We Are," her documentary about AIDS orphans in Malawi, where she adopted son David.

Ashley Tisdale and Christopher French Are Married! See Her Wedding… 9