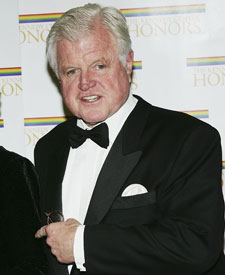 Senator Ted Kennedy has been an agent for change since his election to the Senate, where he has served for 46 years. When news of his brain tumor reached fellow senators and political colleagues, some of them openly wept, reports NY Daily News.

Affection for Kennedy crossed party lines. "I have described Ted Kennedy as the last lion in the Senate," said GOP presidential candidate John McCain. "He remains the single most effective member of the Senate."

Senator Barack Obama, whose presidential campaign won an unexpected endorsement from Kennedy, called the diagnosis "grim news." Obama added, "He has been there for the American people during some of our country's most trying moments, and now that he's facing his own, I ask all Americans to keep him in our thoughts and prayers."

Teddy has been released from the hospital and is returning to Cape Cod, reports AP.