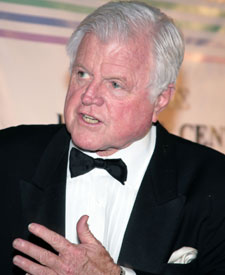 It's yet another heartbreaking crisis for the Kennedy clan. News broke this afternoon that Senator Ted Kennedy has a malignant brain tumor.

Doctors discovered the growth in the senator's left parietal lobe. Damage to that area of the brain can disrupt one's ability to understand spoken or written words. 76-year-old Teddy has been hospitalized since Saturday, after he suffered a seizure and was airlifted from Cape Cod.

Kennedy's wife, Vicki, and his children have been visiting him at Massachusetts General Hospital, where he's been in good spirits and resting comfortably. Teddy's treatment will be determined after more tests -- but patients usually undergo aggressive chemotherapy and radiation.

Calls for prayers for the senator were issued by various lawmakers in Washington. Governor Arnold Schwarzenegger, whose wife Maria Shriver is Teddy's niece, issued a statement thanking everyone for their thoughts and prayers.

Send your well wishes to Senator Kennedy by leaving comments below.