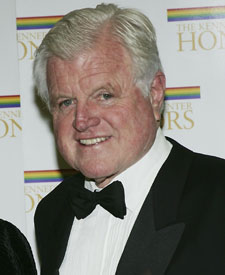 "Extra" caught up with Bobby Kennedy, Jr. at the Riverkeeper's 19th Annual Shad Fest and Hudson River's Celebration, where he said that his uncle, Senator Edward Kennedy, is doing "much better" after being hospitalized after suffering a seizure over the weekend.

The 76-year-old surviving brother of President Kennedy was flown to Boston Hospital, reports AP, where he remains hospitalized awaiting test results to see what may have caused the seizure. When "Extra" caught up with Bobby Jr., he was asked if he had spoken to his uncle, to which he replied, "not today."

Kevin Bacon, who performed at the river event with his band, The Bacon Brothers, wished the senator well. "I just hope he feels better soon," said Bacon.