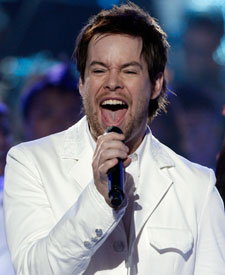 While David Cook prepares for his final "Idol" battle against 17-year-old David Archuleta, it is likely that his biggest fan won't be cheering him on from the studio audience. Cook's brother Adam, who is battling brain cancer, will likely not be attending the two-night "American Idol" finale.

Adam, 37, who traveled to Los Angeles to see David perform earlier on in the competition, will reportedly stay home for the finale due to his condition, reports People magazine. Adam's wife Kendra opened up about her husband's health last month, saying that it is "a day-to-day thing -- I can't look at tomorrow, I have to look at today."

Supporters of rocker Cook will host an "Idol" party in his hometown of Terre Haute, Indiana, where Adam also lives, however, David's big brother is likely to cheer on "Idol" hopeful Cook at home with Kendra and their two children.