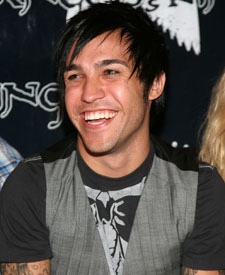 While fiancée Ashlee reportedly celebrated the end of singledom with a luxurious lingerie party, Fall Out Boy's Pete Wentz had his own bachelor bash! The rocker partied with a close group of pals -- including his bandmates, Nicole Richie's man Joel Madden and Pete's soon-to-be father-in-law, Joe Simpson - all out on the town in Los Angeles, reports People magazine.

The group wined and dined at Beverly Hills hotspot Mr. Chow before continuing their night in West Hollywood. As Wentz exited the classy restaurant, he wore a large grin and received a pat on the back from Papa Joe, who said, "This is the man!"

The Hollywood Roosevelt Hotel was next on the list, and the gang partied in the Marilyn Monroe suite, where a source revealed, "It was Pete's bachelor party!" Also at the Roosevelt was Ashlee's bombshell big sis, Jessica, who received a visit in the hotel's lounge, Teddy's.

"Jessica was there with her friends. They stopped in and said it was awesome," says the source. "She was really enthusiastic about it."