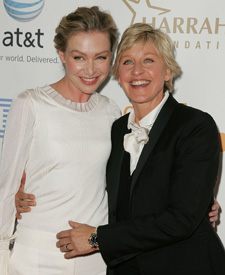 DeGeneres announced their plans to wed during a taping of her "Ellen" on Thursday, on the heels of the California Supreme Court ruling that overturned a gay marriage ban.

Portia, who starred in "Arrested Development," was reportedly in the studio when DeGeneres made the announcement, eliciting a protracted ovation from the audience, reports TMZ. The two have been dating for nearly four years.

Emmys Fashion: Who Brought Their Fashion A-Game… and Who Was the…